This letter was an anonymous submission by an ELCA pastor to ReconcilingWorks in 2016. I’ve included the text below.

I want to tell you how important it is to me that you’re celebrating Bisexual Visibility Week this week.

I’m a not-yet-out bisexual pastor in the ELCA. I can’t be publicly out yet. My congregation isn’t actively and intentionally hostile to the LGBTQ community–aside from a few folks–but to have a bisexual pastor, even one in a heterosexual marriage, is not a step they’re ready for. It would likely mean the end of my call. I am literally an INvisible bisexual person, because my bisexuality is neither seen nor heard.

It’s easy for me to hide, to present myself as heteronormative. I’m happily married to my wonderful wife who knows I’m bisexual, as do a few family members and friends. But that part of my identity, who I am, is unseen, hidden away, to protect myself.

That you have taken the time to promote and advocate for bisexual visibility and awareness means a lot to me. One day, probably as soon as my current call is over, I’ll be able to come out publicly and proudly, standing with my bisexual siblings and the LGBTQ community. Right now, I’m too afraid to. I am an ally and advocate, but one day, hopefully soon, I’ll no longer be invisible.

A Pastor in the Evangelical Lutheran Church in America

There’s something very important you need to know about that letter. About the anonymous author who sent it in to Reconciling Works almost three years ago.

The author is me.

This doesn’t come as a surprise to some of you. Over the last few years I’ve been slowly coming out to people I knew I could trust. Running in rather progressive circles as I do, there are a lot more of my friends who already know than family members. Those I told were immediately and incredibly supportive. A couple had even figured it out already, as I’d been carefully leaving breadcrumbs on social media and in conversation, sort of testing myself for the day I’d come out.

What does this mean?

Bisexuality is a sexual orientation and identity. It doesn’t define one’s actions. It has nothing to do with whether one is monogamous, polyamorous, engages in safe or unsafe sex practices, or the like. Not that bisexual people can’t, it’s just not because of their bisexuality. Bisexuality is solely a description of one’s sexual attraction. 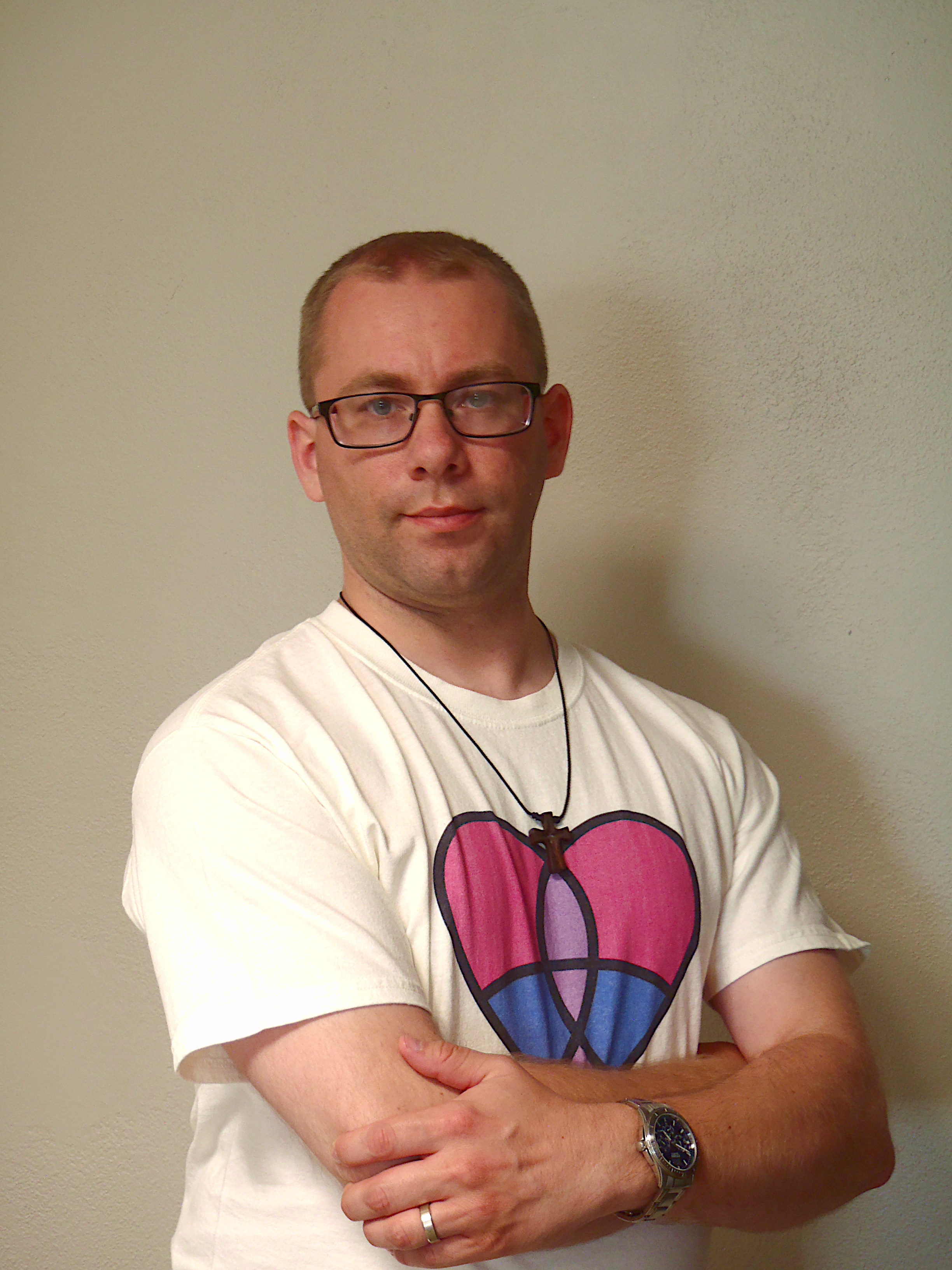 Figuring out my sexuality was a long process, but looking back, it’s painfully obvious that I’ve been bisexual for as long as I’ve been sexually aware. I just never had the words to express my sexuality, nor did I know anyone who could, at the time, help me navigate my feelings. I’m not even sure that I learned the word “bisexual” until almost college, so it’s easy to see why I couldn’t describe myself that way.

I can remember being a young boy fresh into puberty and discovering that he felt attraction to people. I knew I was “supposed” to be attracted to girls, and I was. Like any young boy who hasn’t quite figured out what’s acceptable and what isn’t, I tried to catch glimpses of my female friends (I’m sorry), especially when we were in the pool together. This was “expected” behavior, and I readily participated.

What I didn’t expect, and didn’t know how to analyze, was that I was doing the same to my male friends (I’m sorry). I would subtly glance over when they were in swimsuits, or shirtless, or in the shower at BOA. I felt the same urge to peak at my guy friends that I did at my girl friends. I knew I was supposed to be looking at girls, so that wasn’t a problem or confusing. But I didn’t know what to do about looking at guys.

As the years went by, and I started to acquire some more language for what I was feeling, I began using terms like “curious”. That’s all it was–an innocent curiosity. I began to tell people that I thought women were sexy, but I also “appreciated” the male body for its natural beauty too. I was still only sexually attracted to one, I said.

Around this time I became a part of some online communities (communities totally unrelated to any of this) and developed friendships with the people I frequently interacted with. It was one of them who, after we were discussing sexuality, finally told me point-blank: “Ken, I think you’re bisexual.”

I wasn’t sure how to react. By now I’d heard of bisexuality, but never did I think that what I felt and what I experienced was bisexuality. After all, I’d never been intimate with a man, how would I know? (Never mind that I hadn’t been intimate with a woman either, but that didn’t seem to me to be cause for questioning my attraction to them–go figure).

The door had been opened. Thanks to supportive, non-judgemental friends in these communities, I was able to be open about my explorations. The magic of the Internet provided a safe space and people with which to discuss, learn, and explore my sexuality in non-physical ways. I learned about sexual attraction, identity, and gender identity. I learned that I wasn’t so much attracted to people regardless of their sex, but that I was attracted to people because of their sex, and it didn’t matter what that sex was. I learned what transgender identities were, and was able to quickly conclude that I was cisgender (my assigned sex and my gender identity match). But I could still be attracted to transgender people.

Yet, as supportive and helpful as those friends were (and still are to this day–you know who you are), I wasn’t ready to be open about my sexuality to the world. By now, I was planning to go to seminary, and my church, the ELCA, hadn’t yet removed the barriers for non-cisgender and non-heterosexual people to enter the rosters. I was dating a woman, but what if I wanted to start dating a man? I would no longer be able to pursue the call I felt Holy Spirit pushing on me. I decided, at least for then, to keep my sexuality to myself.

“For then” became almost a decade. After a breakup, I started dating again just before entering seminary. There wasn’t going to be any physical experimenting with men going on while I was dating, so I didn’t see a need to cause myself any trouble by revealing my sexuality to the public. After graduation, I was called to the Northern Great Lakes Synod, a region in the ELCA not known for its acceptance of the LGBTQ+ community. Since I was no longer just dating, but was engaged to the woman of my dreams, it didn’t seem prudent to drop the Bisexual Bomb on my bishop since, as far as anyone would be able to tell, I was straight.

For years, I lived with my bisexuality but was unable to share that part of my identity. I listened as people talked about people like me like I wasn’t in the room, unaware that everything they said, they said about me. I bit my tongue when I was told it was inappropriate to show my support for a friend of mine who was threatened at a bus stop by a knife-wielding homophobe because it “made people uncomfortable”. I inwardly shook my head when I was told that there was no way the congregation I was serving would be open to calling a non-cisgender or non-heterosexual pastor, unable to tell them that they already had and lightning hadn’t yet burned the church building down.

The pressure continued to grow. I couldn’t tell anyone in my setting about my sexuality. I couldn’t risk telling too many people who might accidentally let it slip to someone they shouldn’t. I told friends, some family members, and had the support of my wife — people I knew I could trust and who wouldn’t have the chance to blow my secret — but there were many more I wish I could tell, if only so I wouldn’t have to check my language all the time and make sure I didn’t slip up myself.

Depression, anxiety, weight-gain, and bad health soon followed. Keeping a secret is hard on the body and hard on the mind, and for a long time, it didn’t look like there was an end in sight. Medication helped, having trusted friends to confide in helped. But I couldn’t keep it to myself forever. Eventually, I knew the time would come when I’d be able to be open about my sexuality, but it wasn’t yet.

Simply put, I’m no longer in the same place I was. Just over a week ago, I started my call as the pastor of Bethlehem Lutheran Church in Indianapolis, IN. I knew right away, going into the mobility process for a new call, that I was going to be open and forthcoming about my sexual identity. A congregation that was not open to having a pastor who was a member of the LGBTQ+ community was an automatic non-starter. I’d already spent enough years hiding my identity for my safety, and I wasn’t going to do it again. Luckily, the Assistants to the Bishops and the Bishops themselves I talked to were also supportive, and to make an already-long story short, I was offered and accepted the call from BLC, who was ready to have a bisexual pastor. I no longer needed to hide.

But why come out at all? I certainly don’t plan on getting divorced and being in a position to date again. I have a wife, son, and a life I love. I could just continue to keep quiet, learn to manage the symptoms of my anxiety and depression, and not have to worry about what people think of me and people like me. I’ve done it before.

But this is who I am. Whether or not I’m straight-passing or can hide behind the veil of heteronormativity, it doesn’t change my orientation and sexual identity. I’ve lived long enough suppressing it. It’s time to celebrate it. It’s time to be open about it. It’s time to be able to be more than just a secret, invisible ally to my own community, and to be a much more vocal, outspoken advocate for my community.

Maybe the church isn’t quite ready, a decade after opening the door, to fully welcome and include people like me. But I’m here. We’re here. And we aren’t going to give up on the church just because it doesn’t know what to do with us yet. We’ll help. We’ll teach. We’ll lead. And in the end, saints and sinners that we are, we’ll be able to tell those who come after us that the way has been prepared for them.

I am a bisexual, cisgender man. Queer I stand, I can be no other.

Please consider donating to ReconcilingWorks, a group that advocates for the full inclusion, welcome, and acceptance of the LGBTQ+ community in all areas of the life of the Lutheran church. You never know just whom you might affect.