The lynching tree–so strikingly similar to the cross on Golgotha–should have a prominent place in American images of Jesus’ death. But it does not. 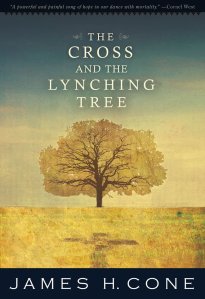 When I picked up this book again a few weeks ago, I had no idea just how relevant and timely it would be.

Judging by the price sticker on the back, I first bought this book from the Steeple People Bookstore (a place I still fondly miss) at Trinity Lutheran Seminary while I was enrolled there. I confess… I don’t remember which class the book was for, and in any case, I’m ashamed to say that I didn’t read it. Not that I didn’t want to, but in seminary, I had a bad habit of not getting through most of my assigned readings, and unfortunately, Dr. James Cone’s The Cross and the Lynching Tree was one of them. How I wish I’d read this book years ago!

The title of the book states its premise: that the “lynching tree” (which was not exclusively a tree) of the late 1880s to the late 1900s is theologically equivalent to the cross on which Jesus Christ was executed. The similarities are so striking that, like Dr. Cone, I too wonder how the connection was never made in the public consciousness.

That is, until I remember that I too never made the connection. I of course had heard about lynching, but it was never something that my history classes spent much time on. And it never came up in my theology classes. We as a country, especially we white Americans, have all but forgotten about lynching.

Throughout the book, Dr. Cone addresses the history of lynching and the brutal reality of innocent black men and women dragged from their homes, tortured, mocked, and eventually murdered. Statistics are incomplete, but the best guess is that around 5000 people were lynched after 1882 (when people first started counting and keeping track).

But he also addresses the theological impact lynching had–or, in too many cases, didn’t have–on people. On the one hand, he talks about the incredible faith of African Americans, who looked to Jesus hanging on the cross to give them the strength to persevere while their brothers and sisters, mothers and fathers, sons and daughters hung from trees, were lit on fire, disemboweled, and beaten to pulp. Jesus’s suffering and death mirrored their own in disturbing ways; they knew what Jesus felt, because they felt it too. He recounts the brave words of blues and jazz singers who used music to bring the haunting reality of lynching into the public sphere where it was already not. He lauds the theologians and Christians who took their experiences of the lynching tree and used them to inspire all forms of resistance to it.

On the other hand, he justly tears into white theologians, especially Reinhold Niebuhr, for their inability or downright reluctance to not only speak out against the evil of lynching, but to take any action. That white Christians were not only complicit in lynchings, but were its chief architects and accomplishers, is one of the fundamental failings of the white American Christian denominations. We were silent; or worse, we were the lynchers. White Christianity very often had no problem with black men and women being murdered in the name of “justice”, just like it had no problem with the institution of slavery for hundreds of years. Dr. Cone uses Niebuhr, arguably one of the most important theologians of the twentieth century, to represent the white Christian’s inability to connect the cross and the lynching tree and our failure to act against the injustice of lynching.

At first, I was uncomfortable with Dr. Cone’s criticism of Niebuhr. But as I read his arguments, I came to realize that I was coming from the same privileged position as Niebuhr. Niebuhr was white, and never had to deal with the reality of living as black in America. Yes, Niebuhr did speak out against racism. But even he admits, “I never envisaged a fully developed interracial church at Bethel [Niebuhr’s congregation]. I do not think we are ready for that.” (p. 43). Dr. Cone argues that while Niebuhr “‘had eyes to see’ black suffering, but … lacked the ‘heart to feel’ it as his own” (p. 41).

And that is the problem with our country’s approach to racism. For people like Dr. Cone, who lived during the lynching era and was terrified every night that his father wouldn’t come home, lynching and the terrible injustice of racism wasn’t just something that was theoretical. It was–is–a lived experience, an ever-present reality. It affected and affects every moment of his life. There is no part of his life that has escaped the threat of being murdered for no reason at all. White Christianity’s unwillingness to listen to the stories of people like Dr. Cone simply because it doesn’t match our story is why Dr. Cone has been accused of being overly negative about white Christianity, even to this day–he has no problem pointing it out.

But isn’t it still necessary? The events last weekend in Charlottesville, Virginia, came as a shock to white Americans. “How can white supremacy still be a thing?” we ask ourselves, while our black siblings wonder how we ever thought it wasn’t. As Dr. Cone reminds us (p. 164):

In 2005 the U.S. Senate formally apologized for its failure to have passed an anti-lynching bill. Did the apology get rid of the hate? What happened to the indifference among white liberal religious leaders that fostered silence in the face of the lynching industry? Where is that indifference today? Did the hate and indifference vanish so that we no longer have to be concerned about them? What happened to the denial of whites who claimed that they did not even know about lynching, even though many blacks were lynched during their adult years? Unless we confront these questions today, hate and silence will continue to define our way of life in America.

Dr. Cone has been criticized for many things: his overly negative view of white Christianity, his overly positive depiction of black Christianity, his primary focus on male theologians and relatively secondary importance given to black womanist theologians. But in this, I think he’s absolutely right. The hate that he lived through didn’t go away. It never has. The events of Charlottesville are nothing new, but just the latest in the long, scandalous history of white supremacy in our country.

There are still lessons we need to learn, if only we could put away our pride and our white fragility and listen. Dr. Cone’s book might be shocking to people who’ve never had these conversations before, but The Cross and the Lynching Tree lays it all out there, and for that, I’m grateful to Dr. Cone for his commitment to racial justice and black liberation.

2 thoughts on “Review: The Cross and the Lynching Tree”